The End is the Best Beginning 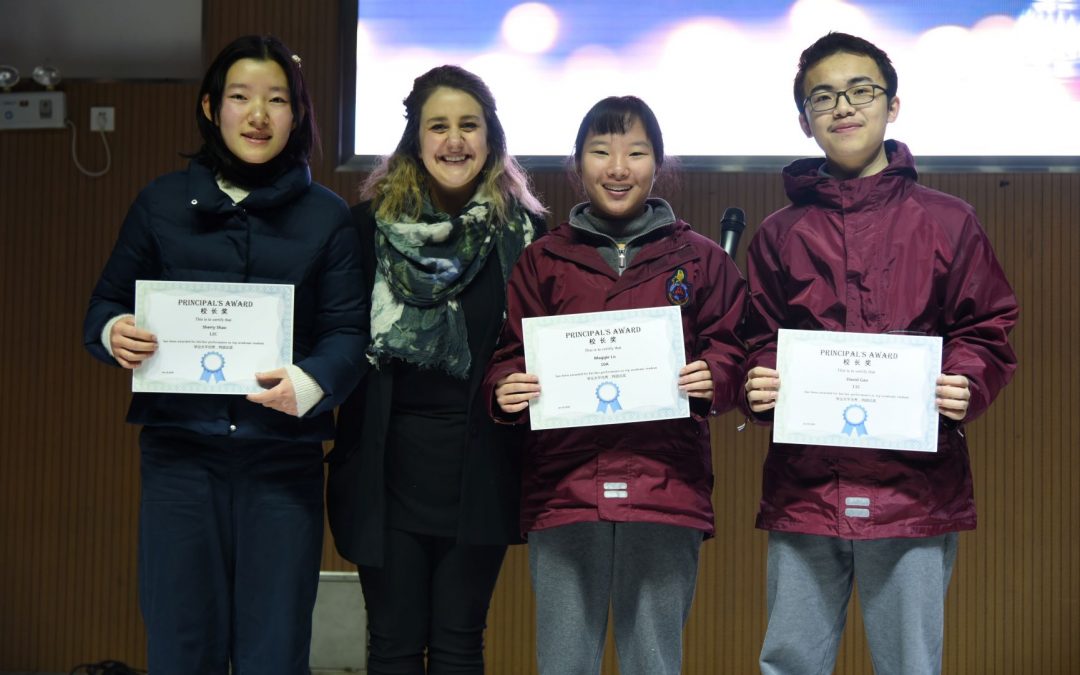 On January 14, the Mid-Year Award Ceremony was held at Shanghai Nanyang Private High School. Ms. Becky Block and Ms. Zheng Shujiao were invited to preside the ceremony. The whole school got together in the Activity Hall to praise hardworking students, summarize our semester and set goals for the future.

In a relaxed and happy atmosphere, the assembly started. Firstly, Ms. Block and Ms. Zheng gave a short speech to the whole school. They summarized some achievements that the school accomplished this semester, which included the promotion of English skills. They also pointed out some things that should be improved next semester. The speech was in both English and Chinese and it was cheerful, helpful, and inspiring.

The next part was for presenting awards. The Grade 10 students received their awards first. Prizes related to the Chinese program went first, which included both academic and social aspects. Students who got the highest mark in a specific Chinese course or those who showed behavioral excellence during this semester were awarded. For example, some students on the stage got 95% in Chinese Culture and some were awarded for always communicating with their teachers respectfully. Whatever the reason was, people on the stage had demonstrated that they were outstanding and deserved our admiration. Then, Subject Awards were given to students who did a wonderful job in their BC courses such as Tommy Cheng and Sigrid Song.

After that, the same awards were also presented to the Grade 11 students. Lionel Liang, Daniel Wang, Steven Zhuang were some of the awards winners from Grade 11. When everyone was guessing the Grade 12 award winners, the school band “Lanterns” gave a surprise performance to the entire school. They had prepared a song called “Fusome” for all the students and teachers to enjoy. That was an amazing performance and “Lanterns” won a thunderous round of applause. Then, the Grade 12 students finally received their awards and Joshua Ma, Annie Chen, Roy Zhang were some of the award winners from Grade 12.

Then, it was time to present some unique awards. The Principal’s Award was the first one. It was presented to a student that performed best in his or her grade both academically and socially. The winners were Maggie Lu, Sherry Shao, and David Gao. The University of Waterloo prizes were also given to the winners of the Canadian Senior Mathematics Contest. Nancy Gu, Brady Chen, and Roy Zhang also won a medal since they were in the top 5%. Finally, “Awesome Citations” were presented by each BC teacher to students received who made an outstanding contribution to the school.

Finally, the assembly came to the end. Many students were proud of their achievements. Overall, the assembly was a good way to end the first semester and a good starting point for the next one.