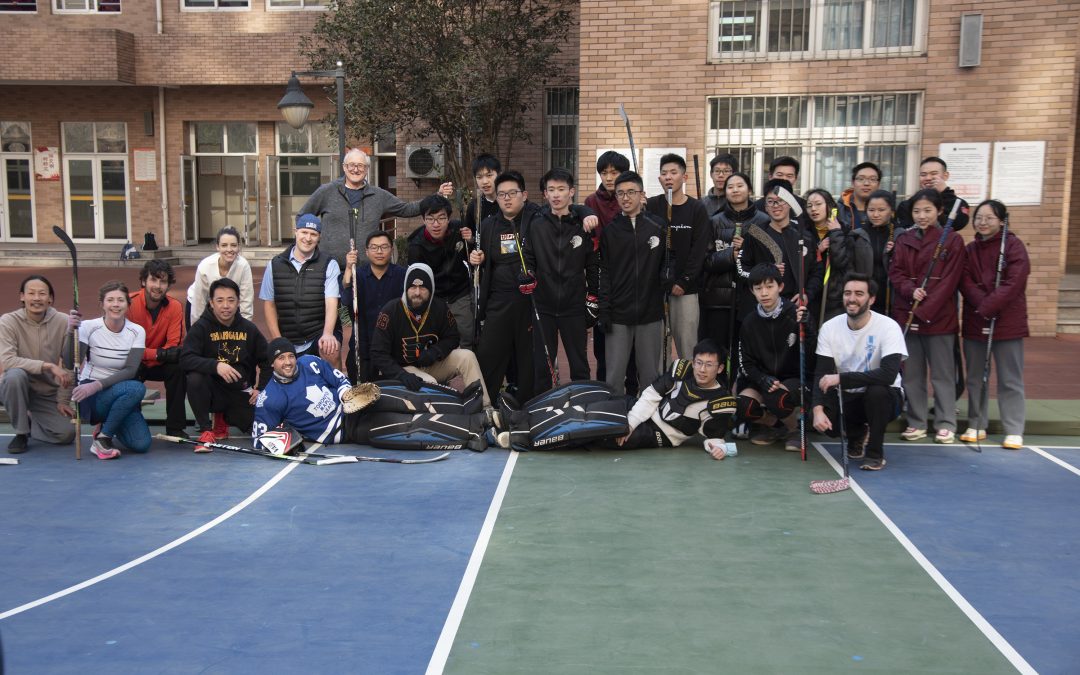 As one of the most vital parts of the hockey culture in the school community, the All-Star Game always plays an important role in the whole season. The student players from three grades have tried their best to make successful performances in the Intramural Hockey League so that they can be chosen in the All-Star Game roster. After the strict filtration, the new All-Star Students’ Team was made. The Teachers’ Team consisted of the BC teachers, who have the advantages on playing hockey as their national sport and always having played well in previous games. Therefore, the All-Star Game interested the whole school from its beginning.

The Teachers’ Team started challenging the student players at the beginning of the game. The successful and wonderful cooperation between Mr. Vuorela and Mr. Hillian continuously attacked the net, but Eric Yao and Jeffrey Zhong also effectively defended the threatening attack and earned cheers from the audience. However, Student Team’s execution was not enough to stop the Teachers’ Team from taking the lead. Mr. Vuorela shot from the left side of the net and scored first.

Minutes later, the Students’ Team made a line-change and started using a close-marking defense strategy to limit the teachers’ performance. Helen Huang’s outstanding defense made it difficult for Mr. Chen to score or assist in the penalty area. Will Shan gave several long passes to the front. James Yang, Severus Tang and Ethan Huang got some opportunities but still failed because of Mr. Schwartz’s stable and extraordinary goalie skill. As the student team’s offence hadn’t succeeded, Mr. Bunton from the Teachers’ Team scored a goal after getting a nice pass from Mr. Sparrow so that the Teachers’ Team was two goals ahead by the end of the first half.

In the second half, Daniel Wang and Frank Huang from the starting lineup participated in the game together again. Ryan Zhang, Rick Liu and Martina Qin from Grade 10 also had opportunities to play. Frank Huang made a fight-back-pass from the back so that Daniel Wang directly had the chance to face Mr. Schwartz, but Mr. Hillian ran back just in time and controlled the puck. Kimi Xu and Hedy Du from Grade 11 also made some shots, but the score didn’t change. By the end of the game, Mr. Vuorela scored another two goals to make the ultimate 4:0 victory for the Teachers’ team.

“This is the first time for us to play on the outside courts, so it is possible for us to meet some troubles,” the student captain Daniel Wang said during the interview. “We ran actively during the game, and we played in the way that we wanted though the result was not that satisfying.”

“I am very happy I scored in this game,” Mr. Bunton said. “I am also happy the All-Star Game was held because it is a big contribution to hockey as a major extracurricular activity of our school.”

All the players participated in the All-Star game and they gave us a wonderful game. The Intramural Hockey League will continue after the winter holiday, and we are all expecting the following games to be more exciting and satisfying!