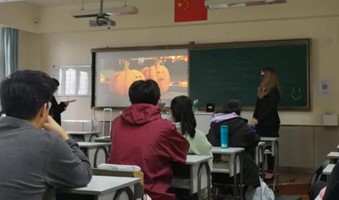 By 11B Crystal Zhu

Real talk, a traditional Nanmo program has been going for nearly three weeks. The program itself is to improve students’ English language proficiency. Early in the winter holidays, all BC teachers worked hard to ensure the program could run smoothly. New rules and forms were then settled on. For example, students are no longer grouped by their homerooms. Instead, all students are randomly grouped into 18 groups, named by 18 North American hockey teams. Team cards, as small as credit cards are given to all students so as to raise the sense of belonging in their teams.

Each student who is caught by wandering BC teachers speaking Chinese during break time in each of the places in school will result in the loss of points for the whole team. Teachers will take away their team cards and make records. After each turn, Mr. Vuorela will make a vivid chart to see the marks for each team. Three groups with the most points deducted will receive corresponding punishments, including dubbing for other teams, saying “hello” in an early tiring morning, or holding an exciting conversation with Mr. Wuerch. Even punishments are designed to improve students’ oral English. Tommy Chen from 11B said that he would rather communicate with his friends in imperfect English than in Chinese. He wanted to grab the chance to improve.

Almost 80% of students have got into the habit of speaking English even without teachers’ supervision. Sometimes, if their language capacity could not support them to say whatever they want, they will use their body language to make it up. Later, some of them will use their cell phones to figure these words out. This is the process of learning and improving, and it is what teachers expect to see. So far, the newcomer Grade 10 students have done a great job, followed by Grade 11, and then Grade 12. Anyway, it is a good start. Next week, all deductions and bonus points will be reset, and it will be a fresh start for all teams.